Walking in Wigtown
Dumfries and Galloway

You are here: Dumfries and Galloway > Sports and Days Out > Walks > Walking in Wigtown

A gentle slope out of Wigtown, Scotland's "book town" with views of the estuary of the river Bladnoch and the nature reserve of Wigtown Bay.

The Martyr's Stakes where two Covenanters - Margaret Lachlane, aged 63, and Margaret Wilson, in her 20s - were tied to stakes in Wigtown's mudflats, and allowed to drown as the tide came in.

This occurred during the "killing years" of 1680-5 as battle raged between the "Covenanters" who believed that no one but God and Christ could be at the head of their religion, and the supporters of James II who wanted to see the Roman Catholic church restored.

Salmon in the river Bladnoch and ospreys.

The many bookshops and cafes in the centre of town and, on the A714, the Bladnoch distillery - Scotland's southernmost producer of whisky.

How to get here

Wigtown is past Dumfries on the A75, then south on the A714. 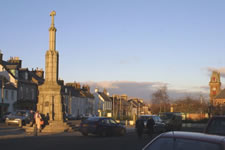 The walk in detail

Walks in Dumfries and Galloway:

Other Dumfries and Galloway info:

How to get to Dumfries & Galloway? See our Travel section >>

Coming for holiday? Find accommodation for your walking holiday in Dumfries and Galloway >>

You may also wish to visit the Location and Maps section which also has local maps for sale.