You are here: Dumfries and Galloway > Sights and Towns > Exploring Glenkiln

Please note: this article was written prior to 2013 when all statues apart from the Glenkiln Cross were removed on police advice due to a theft and are sadly no longer available to view.

The ancients passed this way of course; leaving their marks on commemorative stones and rocks, but the sculptures I was seeking are modern. Glenkiln has been their home only since the early fifties. 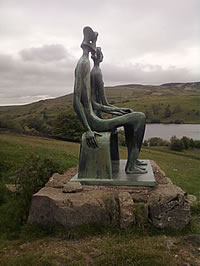 On a warm, breezy day I began this trip from Dunscore, the easy downhill start being to my liking, the pedalling effortless as I headed southwest for the signposted turn off to Speddochhill. Here the road narrows and passes through mature hardwoods for a short distance then gains height winding over open moorland when past Speddochhill farm.

After passing the Marglolly Bridge turnoff the exhilarating downhill pedal round a series of bends was made more interesting by suicidal rabbits seen in a blur as my eyes watered from the cold wind coming off Glenkiln Reservoir. A mile or so to the last bend, over a slightly humped bridge, and I was facing the first Glenkiln sculpture - Henry Moore's "Standing Figure". This was the first sculpture of a limited edition that the late Sir William Keswick, the owner, bought in the early fifties and had placed on the natural roadside rock, creating some controversy.

Impressive on a skyline ridge of Bennan hill, Henry Moore's "Glenkiln Cross" stands like some sentinel totem pole. Unfortunately, the "King and Queen"(pictured) which normally overlooked the reservoir had been vandalised some weeks previously and had been removed. Most upsetting, since Tony Keswick had seemingly delighted in the public's interest. 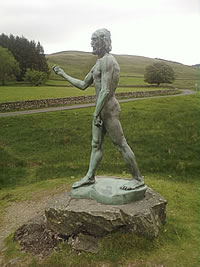 Continuing towards the reservoir, I found "John the Baptist" (pictured), another sculpture, this time by Auguste Rodin. This figure stands atop a rock and appears to have "stepped glistening from the waters of the burn" gurgling behind him.

The road passes alongside Glenkiln Reservoir which that day was being fished by two men standing thigh deep in the sparkling blue waters.

I cycled the short distance to the end of the reservoir here screened by mature larches and took the right hand turn, a short uphill pedal to see the "Two Reclining Figures". Not the name I would have given, it sits on a flat ten ton rock brought from local Morrington Quarry. For me this is the most obscure of Moore's Glenkiln sculptures, but as he said:

"Sculpture should always at first have some obscurities and further meanings. People should want to go on looking and thinking; it should never tell all about itself immediately".

Their position gives wide views northwards. The rest of this round trip took me eastwards within sight of Shawhead, then following the signposts, a very pleasant cycle back to Dunscore.

I chose to cross the Cairn Water at Stepford staying on the heavily wooded south side thus avoiding any lorries from Morrington quarry.