You are here: Dumfries and Galloway > Accommodation > Bed and Breakfasts > Gretna B&Bs

View Gretna B&Bs on a Map

B&B and Guest House accommodation in the Gretna and Gretna Green area of Dumfries and Galloway in south west Scotland ...

Below these B&B listings you will also find information about Gretna and Gretna Green.

Kirkcroft Guest House, Gretna Green
Situated in the very heart of Gretna Green we are handy for all the great things that Gretna Green has to offer. So whether you are just passing through, or perhaps here for a wedding, you can be assured of a parking space, a warm bed and a hearty breakfast at the Kirkcroft.
Tel: 01461 337403

Other Gretna B&Bs in Gretna and Gretna Green:


About Gretna and Gretna Green

A fine centre for exploration, Gretna and Gretna Green provide plenty of good accommodation and the area is bypassed by the busy M74 and A75 trunk roads.

Surrounded by level and fertile farming country, Gretna is within easy reach of the Solway Coast, famous worldwide for its wealth of bird life in winter and a place where the tides race in over miles of sand and mud flats. Within easy reach too are the hills and dales of northern Dumfries and Galloway - whilst Carlisle, Hadrian's Wall and the English Lake District are only a short drive away.

However - it was marriage and romance that made Gretna Green famous. English marriage laws were strict but in Scotland anyone over the age of sixteen could marry without parental consent. 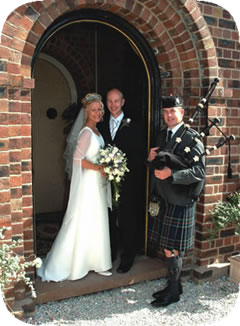 All that was required was a simple declaration before a responsible witness - a blacksmith, for instance. There are several blacksmiths houses from the days of cattle droving when cattle were shod at the border village of Gretna Green on their long walk from Galloway through England.

Many elopements ended happily here, while the village has provided novelists with innumerable romantic stories of lovers driving furiously to Gretna Green pursued by irascible fathers or guardians on horseback or in carriages.

The World Famous Old Blacksmith’s Shop and other marriage venues are at the village of Gretna Green where every facility is offered to visitors, confirming all their ideas of romantic Scotland - a museum of Gretna marriages with kilted bagpipe player, opportunities to reaffirm their own marriage vows, and a display of carriages and coaches, which brought so many eloping couples to the village.

The modern village of Gretna, a short distance away, is an interesting example of 20th Century town planning, built to house munitions workers during the First World War. Spaciously laid out with a large green, the houses, in a simple neo-Georgian style, are symmetrically arranged, a scheme later incorporated in the Housing and Town Planning Act of 1919, the source of many of the new towns built in subsequent years.

In the village of Eastriggs is The Devil's Porridge where you can learn about the story of the greatest munitions factory on earth. 30,000 people from all over the world worked in HM Factory Gretna during World War 1.

In Kirkpatrick Fleming you will find King Robert The Bruce's Cave. Situated in quiet peaceful grounds of 80 acres of wooded and secluded estate beside the River Kirtle is a cave said to have been a hiding place of Robert Bruce.

DISCLAIMER: Although we aim to ensure that web sites that we link to contain suitable material, the Dumfries and Galloway administrators can take no responsibility for external web site content or claims. In addition, link descriptions are written by web site owners and / or managers.